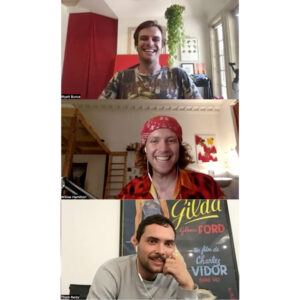 Willow Hamilton, Wyatt Bunce & Thom Reidy brought their film “Killer Whales” to the Sherman Oaks Film Festival in 2021 and took home the Grand Jury Award for Best Feature Film – Comedy.  You know what I didn’t say to them during this podcast?  As a festival programmer who sees over a thousand indie films per year, I can say with complete confidence that a feature length comedy is the most difficult mountain to climb.  And “Killer Whales” is a smart, hilariously absurd feature film with great performances and underneath it all is a brilliantly directed arthouse film just waiting for you to catch it.

So catch it!  The film is released digitally the same day as this podcast!  Go to @killerwhalesmovie on Instagram to learn more or hit linktr.ee/killerwhalesmovie. And you know what?  Please watch this film and then give it a great review!  Great indie films deserve great reviews.