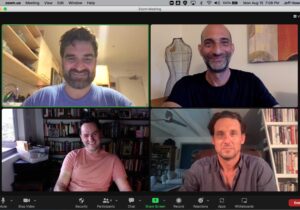 Chris Hall, Patrick Tamisiea and Nicholas Leeds combined forces to make the short film “Bryers Cucumber Tostinos,” which took home four awards at the Sherman Oaks Film Festival in November 2020.  All three of them hopped onto Zoom to discuss their film and once we wrapped that up we recorded them answering the 4Qs above.

Also, I’m proud to say that you can catch “Bryers Cucumber Tostinos” in Season 6, Episode 1 of the Discover Indie Film TV Series on Amazon Prime Video!